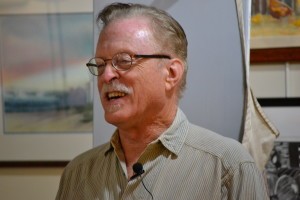 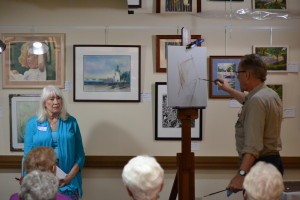 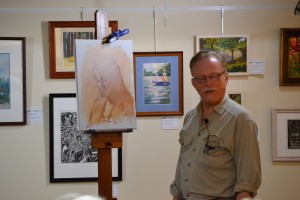 Greg Dearth answers questions from the audience during his presentation. 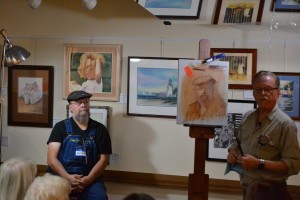 F.A.A. met on Tuesday the 6th. The featured speaker for the meeting was Greg Dearth. Mr. Dearth graduated with a BFA from Ohio University. He has worked as a designer, illustrator and photographer. He has worked for a number of Fortune 500 companies as a member of Scott Hull Associates. Late in the 1990’s he started full time fine art painting, specializing in portraits. He has studied with K.C. Wells, Judith Carducci, and the renowned Nelson Shanks at Studio Incamminati in Philadelphia, Pennsylvania. He focuses on the genres of Figurative Art, Still Lifes, and Landscapes. For the past ten years he has taught portrait painting at Rosewood Art Center in Kettering, Ohio.

His presentation on Tuesday evening was “Direct Painting and the Power of Line, How to start a painting on the right foot and avoid popular mistakes”. He worked in oil, but related observations to all media, and encouraged questions from all present.

He began his remarks by noting that people are afraid of making mistakes; that drawing is a construct of the human mind, and that there are no lines in nature. “The beginning of a painting is in the drawing. If you don’t get life into the drawing at the beginning, it won’t come at the end”. The first job is to show what is in the light, and what is in the shadow.

Greg then went on to discuss the qualities the light: 1. Light, 2. Shadow, 3. Half tones, 4. Cast shadow, 5. Reflective light, and 6. Highlights. His advice: pay attention to angles and structure, don’t get hung up on details. Draw first, and measure second. The artist is “painting the effects of light on the subject”.