On Tuesday evening, February 3, 2015, the F.A.A. members gathered for their first meeting of the new year. Kevin Buntin, Figurative Sculptor, was the featured speaker.

Mr. Buntin demonstrated his creativity in the realm of sculpture of imaginary characters that he develops from natural and man-made materials. He uses locally sourced gourds and other materials, such as leaves, in the construction of poseable figures for display. He finds his inspiration in fantasy and science fiction literature. He discussed and demonstrated the various materials used in his figures. In addition to the gourds and leaves, he uses Almaloy wire for the armature (or skeleton) of his figures, as well as plumber’s putty, sculpting clay and polyfoam 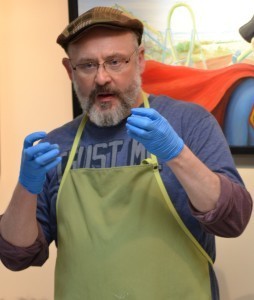 Kevin Buntin gestures during his presentation to the F.A.A. members on Tuesday, February 3, 2015. 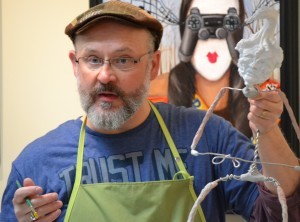 Kevin is holding a work in progress during his demonstration. Note the wire armature skeleton, the plumber’s putty on its “bones”, and the gourd that is its head. Clay has been added and sculpted to the gourd to give it facial features. 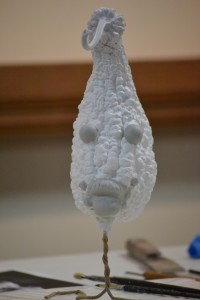 As part of his demo, Kevin added clay to this gourd, then used sculpting techniques to give the face more features. 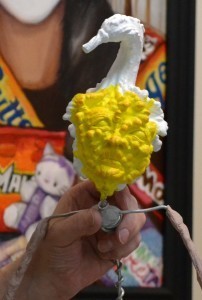 Using acrylics, Kevin applied an undercoat of paint, and then added highlights to emphasize facial features for this sculpture. 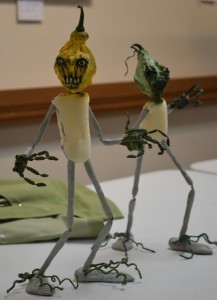 Two creepy creatures from Kevin’s imagination. We were told these were commissioned works. The heads and hands are complete. The bodies have yet to be finished.

Here is an example of a completed work from Kevin’s workshop. This figure is freestanding and is approximately 50″ tall. In addition to sculpting and constructing the figure, Kevin also created the costume and props using natural and man-made materials and fabrics.

to put “flesh” on the bones of the figures. He employs small tools such as dental picks, toothbrushes, and small spatulas to sculpt features of the figures onto the gourds.